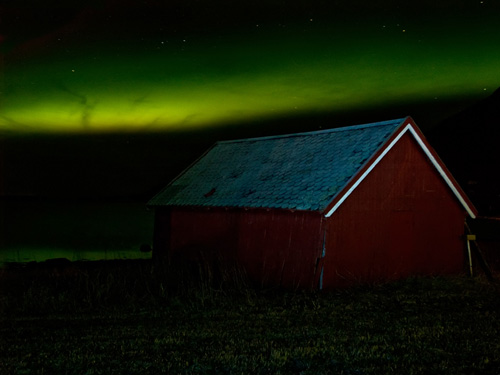 New Years Eve here in Northern Norway, brought some Northern Lights (Aurora Borealis) for me to photograph. I prefer this kind of fireworks to the noisy man-made fireworks that last for a couple of seconds. The spots in the sky are star trails as I used a 40 seconds exposure. I also used my LED headlight to lighten up the boatshed a bit.

This is actually my first attempt at Northern Lights photography and I’m pretty happy with the outcome, although I will do it a bit different the next time. Hope there will be lots more Northern Lights later this winter and that it will be a bit stronger.

Have a look of the same boatshed when there is more light around. The days are definitely getting shorter here in Northern Norway! I took this picture 4 PM in the “evening”.
I really love this scene with the combination of mountain and sea (and of course the boatsheds).

A similar scene, in a spring setting, can be seen in this photo. 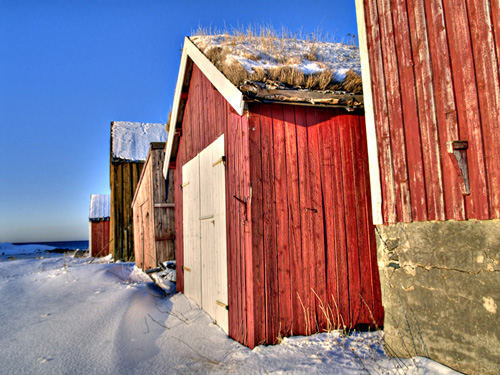 I really liked the rural look on this row of boathouses. The grass roof doesn’t hurt the scene with it’s old look. Boathouses like this represent the old fishing culture here in Norway in a good way. I hope people will take care of these beautiful buildings!

This is also my most popular photo on Flickr. It has received almost 11,000 views and been made favorite 70 times. It reached the fourth position in Flickr Explore on the day the picture was uploaded.
Flickr Explore is an algorithm that chooses the 500 most popular pictures (out of millions!) being uploaded to Flickr each day so it is quite an honor to reach the fourth position.

In this picture I have used something called HDR (High dynamic range) to make the picture look a bit different.

Check out my other boatshed pictures here.

Like the picture? Make a Paypal donation to support the site. 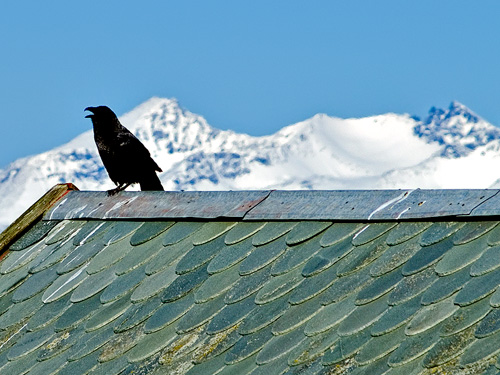 Back in April I found this raven sitting on the roof our boathouse. Maybe it was Hugin or Munin?

Loved the way it the black raven created a contrast to the white snow-covered mountains and blue sky.

The mountains you see are located on the island Senja (the second largest island in Norway).

Check out my photo of a raven flying into “Gods eye”. 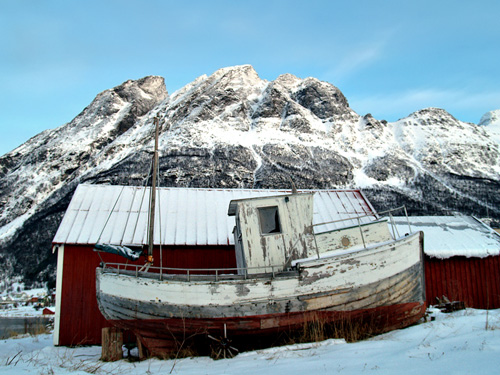 This photo of an old Norwegian fishing boat was taken on the first day I owned my fine Olympus E-500 camera. I have learned a lot about photography since then, but I still like this photo. I don’t think it’s too bad for a first try?

The same fishing boat and mountain can be seen in this photo, but in a warmer setting 🙂