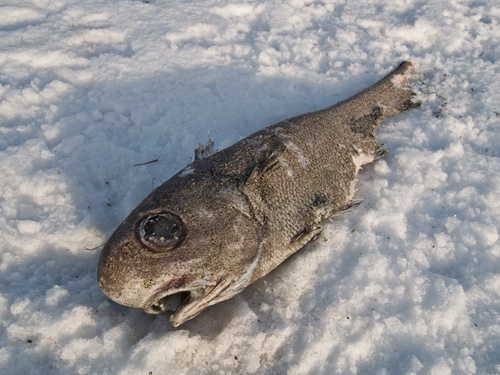 Taken with Olympus E500 digital camera February 28th 2008. Click image for larger view.
I found this half eaten Rattail fish (probably a Roundnose grenadier, Coryphaenoides rupestris) laying in the middle of a field. I suspect that a sea eagle found the fish washed up on a beach nearby (there was sand all over the fish), but due to it size the eagle lost the fish while flying over this field.
I’ve never seen this type of fish before so I had to do a lot of research to figure out the specie. I was tipped of that it is of a family called rattail, also known as grenadier, and more specific a Roundnose grenadier (Coryphaenoides rupestris). This is a deep sea fish living on depths between 100 – 2000 meters and that explains the enormous eyes on this fish.

Check out this picture of my favorite fish the Atlantic halibut.