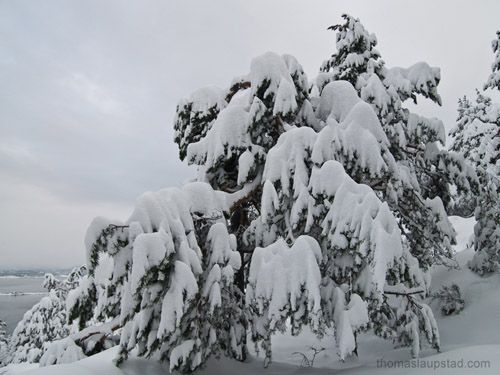 Taken with Olympus E500 digital camera February 8th 2009. Click image for larger view.
We have been having some crazy snowfalls lately here in Southern Norway (I moved to the south from Northern Norway half a year ago for those who don’t know). Some people might think all the snow means a lot of trouble, but I like it. It is fun to play in the snow with the kids and it creates many good photo opportunities.

In this photo you can see a pine tree totally covered in snow. All the snow on the branches show how much snow that really came in a matter of a few hours.
I found the pine tree when I was walking in the forest with snow up to my hip. It was hard walking, but it was wonderful to watch all the untouched snow.

Check out my other photo of a pine tree in winter landscape and other snow pictures here. 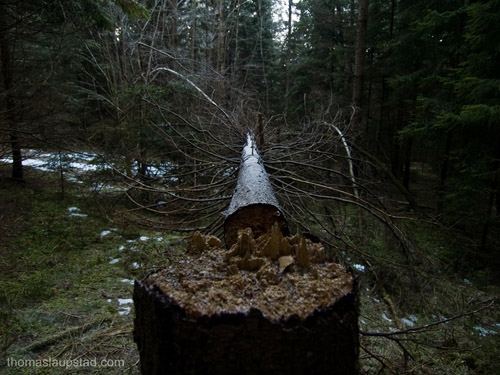 Taken with Olympus E500 digital camera January 1st 2009. Click image for larger view.
When I was walking in the forest I came across a Norwegian Spruce (Picea abies) tree that was broken and I liked the view with the trunk looking at the fallen tree. It seems like a strong wind had passed through the forest and snapped the tree in two. There was several trees in that area that had been toppled over some years ago (the vegetation had started to grow back) so it was a cool area to explore.
I had to climb up some trees to get this picture and I almost fell down several times ;). I think the broken tree picture got somewhat of a dark, eerie feeling to it. What do you think?

Check out this photo of my own Narnia forest and my other photos of trees here and my . 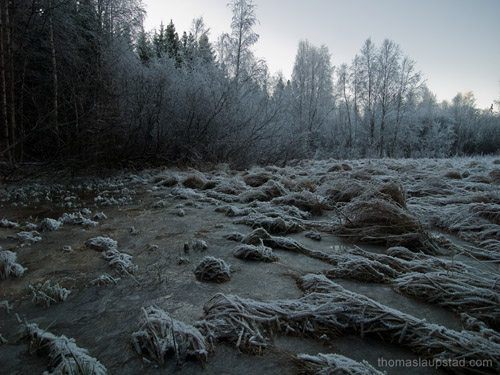 Taken with Olympus E500 digital camera January 1st 2009. Click image for larger view.
I was out walking in the forest early today and I came across this field that was frozen. I really enjoyed all the grass that had frozen in the water and the trees standing around the field covered with rime.
We are having a cold period with -12C so everything outside is covered with frozen water and gives me a lot of photo opportunities.

Happy new year everyone! My resolution for 2009 is to take way more pictures and post them on this blog as I have lately been a bit lazy when it comes to photography. Don’t miss the Photos from Northern Norway 2009 calendar and my other photos with ice. 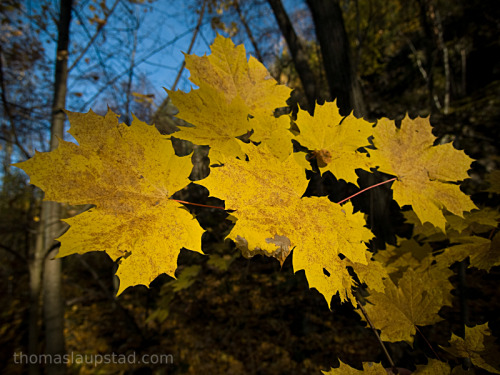 Taken with Olympus E500 digital camera October 19th 2008. Click image for larger view.
In this picture you can see some Norway maple (Acer platanoides) leaves that I photographed this autumn. I really like the shape of maple leaves and with autumn colors they can be a stunning sight. The sun were shining through the tree tops unto the leaves so I just had to take a picture of them.
The autumn colors are almost gone now so it is nice to able to look some pictures and remember how nice it was.
The Norway maple is the only type of maple tree that is native to Norway. The maple trees grow in the southern part of Norway where the climate is a bit warmer.

Check out my other photo from the same trip of the forest floor covered with leaves and my other autumn pictures here. Note: This photo was taken in the southeastern part of Norway.

Taken with Olympus E500 digital camera September 18th 2008. Click image for larger view.
This autumn has been a really awaking for me when it comes to edible mushrooms (and toxic ones). I did not know much about mushrooms except for golden chanterelles and fly agarics. A friend wanted to learn more about mushrooms so we picked up a book at the library describing edible mushrooms. We went out into the forest and found several types of yummy mushrooms.

In this photo you can see Cantharellus tubaeformis (known as Yellow foot, Winter Chanterelle, Funnel Chanterelle and Yellow Legs in English) mushrooms. Funnel chanterelle was the mushroom that we found in largest quantities and we could easily fill a basket in an hour. The funnel chanterelle has a very pleasant taste and we used it in a lot of dishes. It is so great to be able to go out in the nature and harvest all the delicious goods from her 🙂
We actually found so much funnel chanterelles that we were able to dry a good deal. I photographed the whole process of drying so stay tuned to my RSS feed if you want to learn how to dry mushrooms.

Note: This photo were taken in the southeastern part of Norway. This photo should not be used to identify unknown mushrooms to check if they are edible or not. If you are not certain about a mushroom do not eat it!