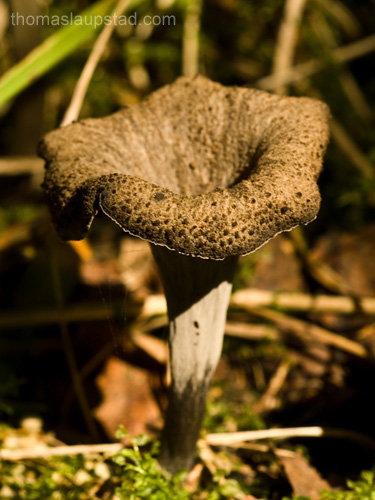 Black trumpet mushrooms (Craterellus cornucopioides) is a very tasty mushroom that can be difficult to find. They are also known as trumpet of death, black chanterelle and horn of plenty. It is said that this mushroom grows where there are oak and hazel, and it matches well since these mushrooms were found near some large oak trees. Because of the color of the mushrooms it can be easy to overlook them on the forest floor. Some mushroom hunters has described the hunt for black trumpet mushrooms a hunt for black holes in the ground. As a specialty mushroom, sold primarily as a dried product, they are mostly imported or harvested wild. The harvesting can be extensive, and sometimes include the removal of the top layer of soil. Either excavator hire or bigger mechanics are implemented. Found under deciduous trees in the Northeast and Midwest, Black Trumpet mushrooms are highly valued and can be used for a variety of purposes including sauces, steak, soups and wild game dishes. If you look for this dark fungus so it is advisable to look straight down instead of around you like you often do when looking for mushrooms such as Golden chanterelle. Once you have found the trumpet mushrooms you may want to take a look near the site where you found them. A tip is to look where there might be streams when there are heavy rain falls. If you follow such streams it should be possible to find large amounts of black trumpet mushrooms.

Black trumpet mushrooms may not be the most beautiful mushrooms in existence, but they are very tasty. They can be cooked fresh and is excellent for drying. Before cooking or drying the mushrooms should be split in half to remove filth that often accumulates in the middle of the mushroom.

Here is a picture of a cluster of black trumpet mushroom: 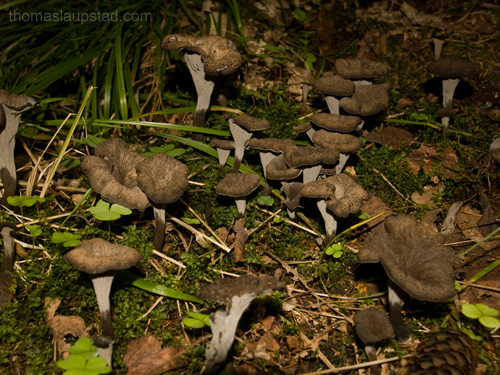 Note: These photos were taken in the southeastern part of Norway. This image should not be used to identify unknown fungi to see if they are edible or not. Do not eat a mushroom you are uncertain about!
See my other mushroom pictures here. 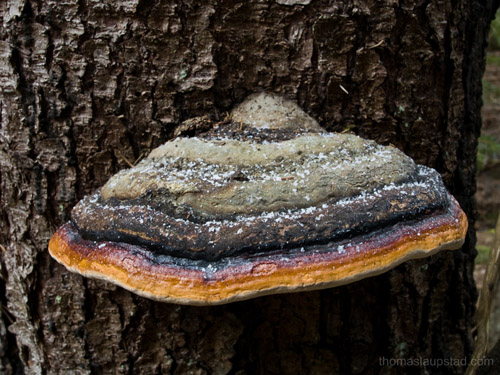 Taken with Olympus E500 digital camera January 1st 2009. Click image for larger view.
Here I have photographed a Red Banded Polypore mushroom (Fomitopsis pinicola) growing on a dead Norway spruce trunk. The colored bands around the mushroom made me stop and take a better look. The bands are really beautiful, aren’t they? Also notice the white snow crystals on top of the mushroom. It was pretty darn cold!

The Red Banded Polypore is a common polypore mushroom in the temperate Northern hemisphere. These kind of mushrooms are often found on rotting lodges and they have a distinctive look.

Check out this photo to see the whole tree that were broken in two. You can also check out my other mushroom pictures here.

Taken with Olympus E500 digital camera September 18th 2008. Click image for larger view.
This autumn has been a really awaking for me when it comes to edible mushrooms (and toxic ones). I did not know much about mushrooms except for golden chanterelles and fly agarics. A friend wanted to learn more about mushrooms so we picked up a book at the library describing edible mushrooms. We went out into the forest and found several types of yummy mushrooms.

In this photo you can see Cantharellus tubaeformis (known as Yellow foot, Winter Chanterelle, Funnel Chanterelle and Yellow Legs in English) mushrooms. Funnel chanterelle was the mushroom that we found in largest quantities and we could easily fill a basket in an hour. The funnel chanterelle has a very pleasant taste and we used it in a lot of dishes. It is so great to be able to go out in the nature and harvest all the delicious goods from her 🙂
We actually found so much funnel chanterelles that we were able to dry a good deal. I photographed the whole process of drying so stay tuned to my RSS feed if you want to learn how to dry mushrooms.

Note: This photo were taken in the southeastern part of Norway. This photo should not be used to identify unknown mushrooms to check if they are edible or not. If you are not certain about a mushroom do not eat it! 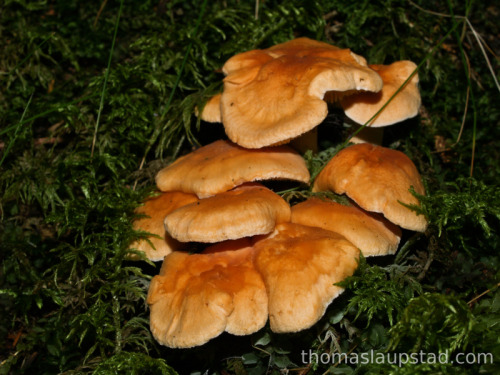 Taken with Olympus E500 digital camera September 18th 2008. Click image for larger view.
In this picture I have photographed some Terracotta hedgehog (Hydnum rufescens) mushrooms. They are closely related to the more common Hedgehog mushroom (also known as Wood hedgehog), but the Terracotta hedgehog have a more red and yellow color on the upper side of the mushroom. These tooth mushrooms are pretty easy to identify due to their teeth, instead of gills, on the underside of the cap, but there are some non-edible mushrooms with the same kind of teeth so this is not an entirely safe sign that the mushrooms you find are edible.
We found a lot of both Terracotta Hedgehog and Wood hedgehog mushrooms this autumn, and I think they are really delicious food! We eat them plain with just some salt or add them to different dishes.
Note: This photo were taken in the southeastern part of Norway. This photo should not be used to identify unknown mushrooms to check if they are edible or not. If you are not certain about a mushroom do not eat it!
Check out my other mushroom pictures here. 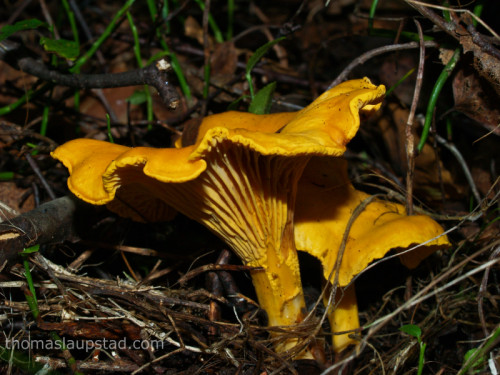 Taken with Olympus E500 digital camera September 18th 2008. Click image for larger view.
Here I have photographed some delicious Golden chanterelles (Cantharellus cibarius). They are the most well known edible mushroom here in Norway and is probably the most exclusive mushroom too.
You can use Golden chanterelles in a lot of different dishes, but I prefer to eat them plain after some minutes on a hot plate with a pinch of salt and maybe some organic sour cream. It is absolutely yummy!

This year we have found a lot of edible mushrooms in the forest so stay tuned for more mushroom pictures. It is very nice to be able to gather edible food from the nature, but it is also a bit scary to gather mushrooms as there are so many toxic ones. I use a rule for gathering mushrooms: If I am not certain I wont eat them! I can also enjoy the meal much better if I know that the mushrooms that I’m eating is safe. If you want to look at a mushroom that is toxic, take a look on my photo of a fly agaric (Amanita muscaria) fungus.

Here is another picture of Golden chanterelle. They are a bit dirty, but fully eatable and I must say I enjoyed eating them. A lot! 🙂 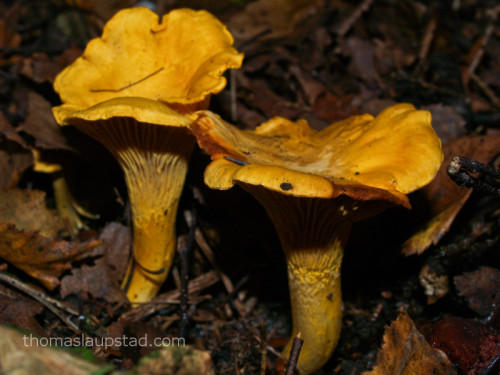