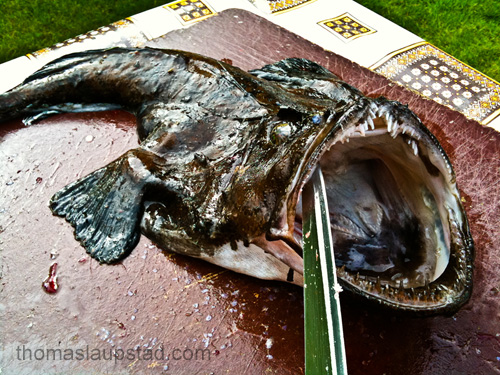 Taken with Apple iPhone 3GS camera August 11th 2010. Click image for larger view.
Here is a picture of a fish called angler fish (Lophius piscatorius) that I caught in a herring net this summer. It was not a big fish, but the angler was a pleasant surprise as I have never caught one of these before either with a fishing rod or in in my fishing nets. It was also a new experience to fillet the fish as it had a pretty tough skin.

The angler fish is also known as fishing-frog, frog-fish and sea-devil. This is a predatory fish that live on the seabed along the coast of Norway. There it lives of prey that the fish attracts with a “rod” on its head. Anglerfish live mainly of other fish, but it can even catch diving birds.
The specimen I received in the herring net was not big, but anglerfish can weigh up to 100 kg with a world record at 99.4 kg caught near Bergen in Norway.

Note: This picture was taken with an Apple iPhone 3GS so it is not the best quality.
Please check out my other pictures of fish on this page.